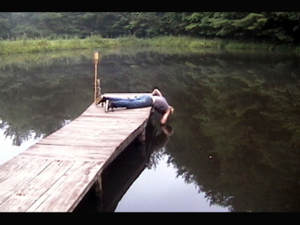 Meet Paul Roux, our September international Artist-in-Residence for the Fresh! AiR collaborative program with the Allan Brooks Nature Centre. Paul is working on an ongoing dialogue with at-risk and endangered species called Project: Apology and we invite you to join Paul for a workshop and artist presentation. Find out more about Paul Roux and Project Apology below!

Paul Roux has returned to California but you can continue to follow Project Apology on-line and see the footage he gathered during his stay in the North Okanagan at www.projectapology.org.

Paul gathered apologies and footage of the rare Spadefoot Toad during his workshop at the Allan Brooks Nature Centre, and also managed to expand his travels to the Kamloops Wildlife Park and also gathered stunning footage of Glacier National Park, and gave a presentation at Thompson Rivers University.

Thanks to all who participated in this worthwhile project!

Paul Roux is a South African native, and comes to the Fresh! AiR residency and the Okaganan via Boston and California. He graduated in 1998 from the Michaelis School of Fine Art (University of Cape Town, South Africa). After a detour into advertising and marketing, his recommitment to the fine arts over the last several years has seen a number of awards and solo exhibitions, as well as scholarship for further study at the School of the Museum of Fine Arts in Boston. His work is represented in collections in Europe, South Africa and the US.

In a world that perhaps sometimes leaves some room for improvement in terms of how we treat each other, and the planet that sustains us, much of my work (whether painting, performance/public intervention or writing) is concerned with processing ‘stuff’ that I see in the world that I live in; with attempting to come to terms with some experience, way of seeing or scientific reality.

Some examples of such ‘stuff’ might be imbalances in resources, social censure, consumer consciousness, beauty, species extinction, perversely utilitarian power-tripping at the expense of the planet and the ‘common man’, and so on.

My performance work is usually concerned with engaging viewers around the separation between humanity and the planet; and between the socialized self and (what I call) the “real” self. ~ Paul Roux

Project Apology is an ongoing video documentation of my undertaking to apologize, in person and as a self-appointed member of humanity, to non-human species on the planet that are being adversely affected by human activity. The project’s intent is to use satire as a means to deliver a serious message in an unconventionally and ‘amusingly’ palatable, yet provocative manner – in attempting to come to terms, morally and spiritually, with the human implications of our current scientific reality (evidenced, for example, in the current rate of species extinction documented by the International Union for Conservation of Nature – IUCN and the rising incidence of ‘natural’ disasters).

Project Apology aims to engage viewer in the scientific reality of the contemporary moment in a novel way. Of course, the issue of our severe and escalating impact on the planet sometimes seems trivial in a world where hundreds of millions of people have nothing to eat and more than a billion do not have access to clean water. The spiritual and ethical implications of our impact on the planet aside, to me these are equally important challenges because rapid population and industrial growth will continue to have an escalating affect our own sustainability in various way – from food production, through to climate change and water quality. And just as there are more than enough resources on the earth for every person to have more than enough to eat and to live comfortably, so are there enough resources to ensure that all beings have access to their birthright of a pristine ecosystem in which to flourish.

The scientific reality is that we are in a period of mass extinction and that, as part of a symbiotic ecosystem, we are ultimately endangering our own survival. And so, to me, the act of apology, though intended partly as a satire of contemporary humanity, is also an acknowledgement of our common humanity and our true nature as part of the single global ecosystem. Project Apology is thus also an apology to ourselves, an acknowledgment of ourselves.

Currently, aside from compiling previously completed apologies as time allows, I am working on the idea of making future apologies more targeted (as I come to terms with the theory of endangered species lists, criteria and sub-classifications; and thus am able to create some sort of regional priority list).

The Okanagan is considered as one of the three most endangered ecological regions in Canada, providing critical habitat for many severely endangered species – such as the White-Headed Woodpeacker, Lewis’s woodpecker, the Great Basin Spadefoot Toad and the Yellow-Breasted Chat, among many others.

As such, it would be a wonderful location for Project Apology to visit and during the residency period I would make a number of targeted and sensitive apology outings, facilitated by local knowledge so as not to disturb habitat or inhabitants.

More importantly, while at the Caetani Centre I would hope that the project would facilitate much formal and informal debate on these issues as part of the process of further refining the project into a workshop format, whereby others are actively engaged in the act of apology with me. And so, I would hope to involve children and adults in interactive workshops comprising of an initial slideshow/presentation, followed by a group apology component, and subsequently by a processing and imaging component.

After an initial power-point introduction to the project, participants will engage through the act of apology with the myriad manifestations of life with which we share our planet, both individually and as a group. This experience will be introduced and facilitated by myself and all participants will be asked to refrain from talking with each other during this time.

After this period of reflection and acknowledgment, participants will be asked to spend half an hour translating their ‘field’ experience verbally and visually, on an individual basis and while maintaining relative silence. Paper and drawing/writing materials will be provided.

Participants will then be asked to peg their responses to a piece of string running between two posts at the center. Standing or sitting around the responses, we will then have the opportunity to share our experiences with the group. After around half an hour or so, or once everybody has shared their experience, I will close the workshop with a moment of silence for all the wonderful creatures with who we share our beautiful planet.

Participants will be able to write down their email addresses to receive a photograph of the finished responses.