The Allan Brooks Nature Centre will host a talk by artist Anna Glynn and biologist Peter Dalmazzo from Australia. They will give a presentation on both past and present work, including their “Okangan Valley Soundscape”, a unique interdisciplinary collaboration that will combine art and science to capture the sounds of the Okanagan Valley.

“We live on the edge of a subtropical rainforest on the south coast of New South Wales, Australia and both have a love of nature. We live very close to our natural environment, which has abundant bird and animal life, and have come to know it intimately.

Same but different – the Okanagan Region in many ways is similar to where we live, yet so different. Compare and contrast. Many questions spring to mind… How does the light at higher latitude affect the ambiance of a place? Will we be able to find our way around with the sun in the southern sky instead of the north? What is the ambiance of a Canadian forest compared to the feel of a subtropical rainforest or a eucalypt forest?

The landscape of the Okanagan Valley is comprised of elements that we are passionate about and we welcome the opportunity to explore and record material from the surrounding natural environment; a new environment for us to explore and respond to with ‘fresh’  senses.

Thank you for the opportunity to be here and to share your beautiful place.”

Multimedia artist Anna Glynn and biologist Peter Dalmazzo have teamed up for this interdisciplinary collaboration, working on a project based around the sounds of the Okanagan landscape both from nature and human environments. Bird calls are an obvious component of the acoustic character of most places but many other sounds are present and some are filtered by our auditory system and brain. Many sounds are often considered to be ‘background noise’.

Anna and Peter are interested in how the acoustic character of a place is as particular and distinct as its visual character. During their time here, they are undertaking an acoustic survey of the Okanagan landscape, collecting sounds throughout the environment, above and below water, terrestrial and aquatic, in a variety of ecotypes, forests and grasslands, urban and rural areas. Peter will be creating a catalogue of sounds (the science) and Anna will create a soundscape (the art).

Read a letter from Anna and Peter!

“My work often references our natural world and expresses curiosity and wonderment. I am intrigued by our human interpretations of nature. My work reflects a strong and powerful relationship to nature and a questioning of our role as beings in this natural world. I use this substance and spirit as my foundation to create multimedia artwork investigating connection between humans and nature, land and place.“ – Anna Glynn 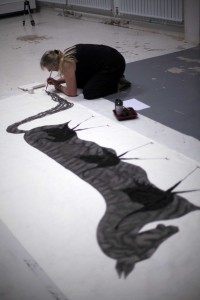 Anna was a finalist in the 2013 ‘Australian Art in Asia Awards’ which recognised her ongoing commitment to international collaboration. In 2014 she was awarded a Veolia Creative Arts Scholarship in recognition of her “commitment and contribution to the creative arts”. In 1998 Anna received an International Women’s Day Award for contribution to ‘Women, Art & the Community’. In 2009 her painting ‘Brave Hunter’ was chosen as the iconic Australian image for the cover of ‘A Concise History of Australia’.

Anna has undertaken a number of successful residencies both within Australia and internationally, most recently in 2013 in the Department of Visual Studies, Lingnan University, Hong Kong where she undertook research, taught multimedia, lectured and mounted the ‘Wonderment’ exhibition at the University. Anna regularly exhibits internationally: including the Art Museum of Zhu Qi Zhan, Peking University/ China & the Kyoto Museum / Japan.

Peter has worked for more than 30 years as a biologist and environmental planner. His initial motivation for studying biology was a passion for fish and he majored in Marine Sciences and Biology. He soon realized that other living things are interesting too, whether they be animals or plants, living in water or on land. Peter’s broad experience now leads him to deal with all kinds of fauna and flora in the aquatic and terrestrial environments.

Peter has previously worked in the private and public sectors (state and local government) and in tertiary institutions including the University of Sydney and the University of Wollongong, during which time he has undertaken scientific research and education (teaching and developing teaching materials), prepared flora and fauna and threatened species assessment, produced estuarine and coastal management plans, and carried out environmental planning and impact assessment, public place planning and community engagement. Peter has been called on to present evidence at Commissions of Inquiry, Mining Warden’s Inquiry and Land and Environment Court hearings.

Peter is excited to be carrying out an acoustic survey of the Okanagan landscape. His very first job after graduating all those years ago involved recording and analysing sounds made by fish and other marine creatures in Australian waters, producing the Catalogue of Australian Marine Animal Sounds. Peter still uses sound in his work, for example by identifying frogs and birds from their calls when carrying out fauna surveys at proposed development sites, and is delighted to be here involved in a project totally dedicated sounds in the surrounding environment.