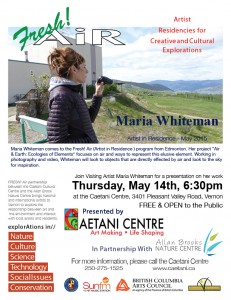 Air has become something I’m strongly drawn to visually because you can’t see it, but carries a significant importance because it becomes an object on its own, in our minds, as if we can see it in our consciousness as a form, hence, an element.

Maria Whiteman was an Assistant Professor at McMaster University 2003-2008 in Multimedia, School of the Arts and Drawing and Intermedia in Fine Arts at the University of Alberta 2009 – 2014. She taught graduate courses in contemporary art theory and studio courses in mixed media, photography, video, drawing and installation art.

Her current art practice explores themes such as art and science, relationships between industry, community and nature, and the place of animals in our cultural and social imaginary. In addition to her studio work, she conducts research in contemporary art theory and visual culture. Maria has published critical texts in Public: Art/Culture/Ideas, Minnesota Review and Antennae and an essay on Visual Culture in the John Hopkins Guide to Literary Theory and Criticism. In 2011, Whiteman was the recipient of an Interdisciplinary Course Seminar Grant from the Kule Institute for Advanced Studies was a scholar in the Canadian Institute for Research Computing in the Arts. In 2011, she had a solo exhibition at Latitude 53. Exhibited in the Alberta Biennial at the Art Gallery of Alberta 2013. Whiteman was a co-director of the 2012 (BRIC) Banff Research in Culture/ documenta 13 research residency and participated in the Geoffrey Famer Residency at the Banff Centre in 2012. She has been presenting conference papers and exhibiting artworks at the SLSA 2012-2015. Whiteman’s “Mountain Pine Beetle and Roadside Kestrel” most recent video/photography work will be premiered at the Houston Cinema Arts Festival and Rice Media Centre, Houston, TX, Nov 2014.

Whitman will be attending the Caetani Culture Artist in Residence FRESH AIR! Okanagan, Vernon, BC, Alberta May-June 2015. In November, 2015 Co-organizing “After BioPolitics” The SLSA Society for Literature, Science and the Arts, Keynotes (Mark Dion and Vinciane Despret) Houston, Texas. She is also the recipient of the Visiting Scholar Lynette S. Autrey Fellowship 2015-2016, Rice Seminar, at Rice University.

Touching Grizzly from whiteman on Vimeo.

I have been thinking about the elements, but especially of air for sometime now. It started with two films I made in collaboration with a poet. The first one is Mountain Pine Beetle, which is a beetle that travels from Alberta to Colorado. The first part of the narrative are shots of the sky, wind and tree tops that carried the beetle from Alberta down to the southern Rockies, the sky was part of how I entered into the piece on the beetle. Another film titled Roadside Kestrel, is about a raptor bird I find on the side of the road. This video narrative begins with the sky and movement and the quandary of wild life with wings that exists as part of the sky as we know it, much like mammals that live on land, we face upward rather than downward to see these creatures. I focus on the domain of air, wind and sky to show what makes it possible for birds to migrate and move from one place to another. In both pieces, my perspective is from inside a car looking at the sky, watching the passing of clouds, trees, phone lines, bridges and birds.

I want to make visible or noticeable the entanglement of clashing environments and elements that make certain species live in many different places in order to survive, to reproduce and to thrive. Airhas become something I’m strongly drawn to visually because you can’t see it, but carries a significant importance because it becomes an object on its own, in our minds, as if we can see it in our consciousness as a form, hence, an element.I see air as a hyper-object that is invisible and yet has symbolic qualities that threatens our existence, I see Air as something in our interests to understandmaybe even grasp differently than how we imagine, as something more than what we breathe but as airways, passage ways and currents connected to many other important underlying issues. I don’t want to draw on the negative like pollution and smog but rather draw on the positive ways in which we value air and its attributes to think about new ways of thinking of Air. I challenge myself to make air visible by trying to photograph and film through these mediums and make visible what is invisible. What are the air particles floating in the air that we breathe in and out. To me air and life are entangled and are part of a entangled ecology and sky-scape that I would like to explore while I am at the residency.

The project I propose will investigate the elements of air, wind, fire and earth, but with a focus on Airand hopefully continue more work on my walking pieces (Terrane) as part of the Earth that is connected to this series and which is in progress. I love the idea of being in BC and in the Okanagan valley, because of its essential landscape and terrain but also because there is a lot of sky to work with. I want these elements to speak to an over arching topic that is about “life” and how we understand what we mean when we talk about life, matter, particles and other compounds that keep humans/animals and other life forms alive.

This is what I call entangled ecologies. How can we see and take in the undercurrents that threaten our existence such as changes caused by humans, like global warming and therefore climate change? My work at the residency I will film and photograph the tops of objects, the top of trees, the tops of houses, the tops of mountains, the top of phone lines and ridges and tops of people’s heads. I want to only film the tops of everything to keep the focus away from the objects but with the focus on the sky and to keep in mind the significance between object and air. The mediums I will work with are video and photography. I see this project as an installation and also a book that I am putting together on the four elements.

The main goal of my artistic practice over the past decade has been to investigate and interrogate the ways that we conceptualize, visualize and narrate our relationships to and understanding of the non-human world, ecology and environment. The main forms that I’ve employed to carry out my projects have been large format digital photography, video and installation art.  I want to create a new visual language to understand these intersections of the human-natural world in order to help us think the future in full awareness of the actual character of the physical and mental landscapes we currently inhabit.