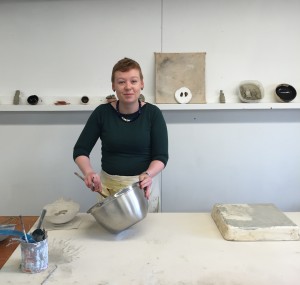 The Caetani Cultural Center and Vernon Community Arts Centre are pleased to announce an upcoming artist talk and presentation by visiting ceramics artist Sarah Ryan. Hailing from Ireland, Sarah is the Caetani Centre’s newest CeramAiR (Ceramics Artist in Resident). While she has been staying at the Caetani Cultural Centre, she has been working out of the Vernon Community Arts Centre since February, continuing her explorations into clay and process. Her work will culminate with a solo show at the Arts Centre in May.

Process focused, Sarah has been working with the local clay, beginning with some excavations along Pottery Road, the area made famous by the local pioneer potter Axel Ebring in the 1930s. Along the way she has met people that help her collect and transport the clay, although most of the time it’s just Sarah, her bike and a backpack. Most recently she has branched out from Pottery Road and some of the latest clay she has brought back to the studio comes from a nearby construction site. While the process depends a lot on the nature of the clay, Ryan says that the work she produces in the studio is not necessarily the most important part. Not only does the ritualistic process of digging up and working the clay become a huge part of her work, but so does the community aspect.

Being a part of the Vernon Community Arts Centre has had an impact on the work, from the overheard conversations to the sharing of knowledge, the nature of working in a shared space with other ceramicists adds another layer of meaning. It could be said that Ryan is bringing the landscape inside and offering it to the community in a different way. When Sarah arrived here at the Arts Centre in February, she only brought with her a notebook and pencil, so everything in her studio now has either been found, given or lent. Again this goes back to the whole notion of process, through which relationships are created; relationships with other ceramicists, the community, the clay and even her bike and backpack.

While some of the work to be exhibited at her upcoming show will be installation based, much of work that she has been doing involves testing the properties of the local clay she digs up. Through some minor tweaking, Sarah and the VCAC studio techs have created a beautiful and surprisingly stable glaze from the Pottery Road clay. In a sense, she is retracing the steps of Axel Ebring, although unlike Ebring, her work is not about production. When her residency concludes, Sarah will leave most if not all of the clay and glaze testers behind, with the intention of leaving it as a gift for the community. As she arrived with only a notepad and pencil, that very well may be what she leaves with.

Please join Sarah at the Vernon Community Arts Centre on Wednesday, April 20th at 7pm for a presentation on her past work, artist residency and current explorations. And those who might be interested in heading over to Pottery Road should keep an eye out for little clay figurines that she has hidden along the way.