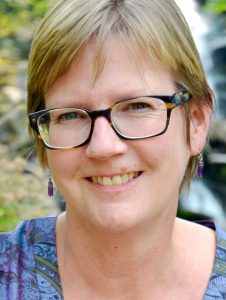 Anne DeGrace is a writer, illustrator, and librarian living near Nelson, British Columbia. She is the author of four novels, all published by McArthur & Company. She is now represented by Cormorant Books.

Treading Water (2005), was inspired by Renata, a community that once flourished on Lower Arrow Lake in the B.C. interior before hydroelectric development flooded the town, leaving only its stories. Treading Water was chosen as a Chapters/Indigo “Heather’s Pick” and in 2010 it was the One Book, One Kootenay selection.

Wind Tails (2007) examines the chance encounters that change the way we see the world, as told through the tales of the disparate travellers who pass through a roadside café. Wind Tails was shortlisted for the 2008 Ontario Library Association Evergreen Award.

Sounding Line (2009), also a Heather’s Pick, is drawn from Anne’s Nova Scotia roots. With a historical backdrop of a 1967 U.F.O. crash, the novel plays with themes of depth, space, and possibility, viewed through the lives of the residents of a fishing village.

In Flying with Amelia (2011), the descendents of an Irish immigrant family scatter across Canada, their stories taking readers over 100 years. From St. John’s Newfoundland to the Beaufort Sea, the story weaves the identity of a young country.

Anne offers short workshops in developing critiquing groups for writers, and in beginning writing for teens and adults. She has offered writer-in-the-classroom presentations and workshops, including fun writing exercises to get the juices flowing. Anne’s workshops have been enjoyed at the Shuswap International Writer’s Festival and at secondary schools and libraries in the West Kootenay.

For more information go to www.annedegrace.ca

Flying with Amelia soars across Canada

It’s not often that a book makes me late for drinks with a friend, but I was in the middle of the title chapter of Anne DeGrace’s latest novel, Flying with Amelia, and I had to find out what happens to the characters. And then I had to mop the tears off my face.

Being moved by a book is one of the great joys of my life, and Anne DeGrace never fails to deliver emotionally rich and aesthetically enticing fiction. In this fourth novel, she tackles a huge subject: the canvas of Canada over time, from 1847 to 2012. While I wanted to know more about the characters, she manages to move readers along to the next chapter, with a new time frame and new characters, in a thoroughly smooth and wise way.

The novel opens with Across the Atlantic, the story of the Murphy family, who are leaving their poverty-stricken circumstances in Ireland for the hope of a better life in Newfoundland. DeGrace describes the hellish voyage so viscerally that readers will find themselves stuck in the appalling conditions below decks with the Irish families, hoping to survive the trip and then their new home. Mary Murphy narrates the experience, a truly hideous one: “Some [biscuits] have weevils, and I tap them out so the children will not see.” Mary’s story shows the extreme lengths to which people will go to try to improve their lot in life. It also shows the power of poverty, a topic common to much of the novel.

With each chapter, DeGrace captures the voice of the characters in their time. The second chapter, Static, is set in 1901 in St John’s, when a boy named William earns some money by helping Marconi with his work. Everyone is poor, and William’s father doesn’t help the situation by drinking up any spare cash. But DeGrace manages to humanize the man while exposing his considerable failures.

The chapters are connected by fragments of family. The novel shows how spread out and broken a family can become, especially in a land as vast as Canada. The varied settings connect time and place with significant events, personal and occasionally international. For example, Angel is set in Montreal in 1929, and clearly the stock-market crash plays a devastating role. All of the Colours is set in a PoW camp in rural Manitoba in 1944. A Different Country is set in Toronto in 1967 and features James, a young American draft dodger. In every case, DeGrace makes the place and time lift off the page.

Generally in the novel, people move to find work or escape a bad situation. Life is hard, and the people that DeGrace writes about are not the wealthy. She is concerned with those whose basic needs are a challenge. And when the necessities are lacking, people respond in time-honoured ways, such as drinking and violence. But they also respond with love and care. In Home Girl, an elderly woman named Olive befriends Winnie, a young “home girl” sent from London. Winnie is in danger, and Olive does everything in her power to help her. Decency and kindness are the glue that can hold people together in the midst of appalling situations.

The title story is mainly told in letters, and it starts with a man’s newspaper advertisement for a pen pal. As the correspondence develops, so do the feelings of the writers in an utterly believable way. The book is worth it for this chapter alone, but all the others have as much resonance.

The final chapter has the same title as the first, Across the Atlantic, yet this time the travel is in the opposite direction as DeGrace embroiders the threads of family connection through time. Flying with Amelia is a beautiful achievement by a gifted writer.