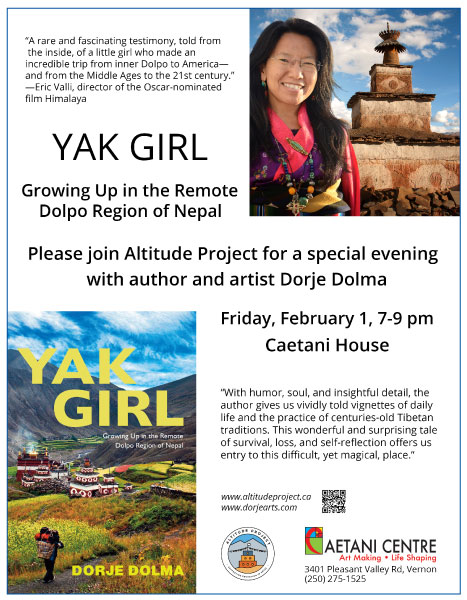 In a remote region of Nepal, at an altitude of 13,000 feet, a community ekes out an existence against a backdrop of breathtaking beauty. It’s a place most of us will never see, but we can catch a glimpse this month. Author Dorje Dolma presents her book Yak Girl: Growing Up in the Remote Dolpo Region of Nepal at a special presentation on Friday, February 1 at 7:00 pm at Caetani Centre Studio Gallery in Vernon. The multimedia presentation is accompanied by portraits from the village by photographer David R. Gluns.

The outside world knew little of the Dolpo region when, in the 1980s, celebrated travel writer Peter Matthiessen described life there in The Snow Leopard. Then, Dolpo had no running water, electricity, motor vehicles, phones, school, or doctors other than the lamas trained in the use of herbs and prayer. This is where the author grew up, caring for her many siblings and the family’s sheep, goats, and yaks—even defending them from snow leopards.

Yak Girl describes the author’s life in what one review called “a vivid testimony of growing up and learning to survive in a harsh, rugged, yet astonishingly beautiful land.” Included in the story is the perilous, month-long trek to Kathmandu with her parents to meet the westerners who would take her to the U.S. for the surgery that would save her life in “a candid, true-life story of hardship, strength, family ties, and culture shock.”

Dorje was eventually adopted by her new American family; she graduated from university and became an early childhood educator before undertaking this, her first book.

The tour also includes schools in Nelson, and presentations in Rossland, Castlegar and Nelson. On Monday, February 4, at 7:00 PM, the Civic Theatre in Nelson will show the documentary The Only Son, which follows Dorje’s brother Pema and his family, and the struggle to preserve a culture.

The tour is sponsored by Altitude Project, a non-profit registered charity which sponsors education, health and infrastructure projects in the Upper Dolpo, Dorje’s home region of Nepal.