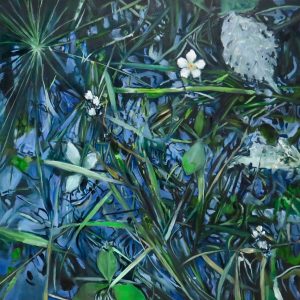 Refreshments will be served. Reception and gallery hours are open to the public and all ages.

Corey will also be teaching a painting workshop while at the Caetani Centre. Learn more and sign up here. 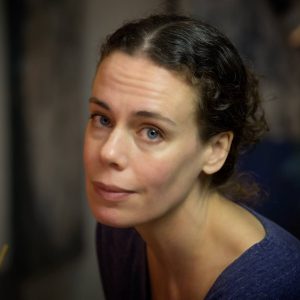 Corey Hardeman is a Canadian oil painter who lives and paints in Vancouver.

Corey’s formal education in biology and, later, in architectural drafting and classical drawing have all influenced her art making, which combines elements of traditional illustration and technical drawing with a love of tonal painting, an abiding interest in biological systems and an eye for tension and movement.

She has shown her work in group and solo exhibitions across Canada, and was chosen as the inaugural recipient of the Prince George Arts Council’s Artist in Residence program in 2013. She was the Art Battle live painting provincial champion in 2013, and competed nationally at Maple Leaf Gardens in Toronto that year. She has worked as a courtroom sketch artist and a CAD draftsperson, but has worked diligently for the last decade to avoid ever working at a “real job” again. Corey paints full time, and divides her practice between Vancouver and Prince George, BC.

She is a mother of four feral children and friend to a broad array of animals, about half of whom possess spines. She spent several years living off grid in a handmade yurt and has nursed a variety of injured birds and small animals to health, all the while maintaining a robust presence on social media, to which she is unabashedly addicted.

All of her paintings are undertaken as an examination of my place among living things, and of the changes she has witnessed to the life systems around her.

Her observations lend context to her inquiry into her relationship with home and habitat, with her own species and with the planet. Together, her paintings comprise a documentary view of home, of a planet undergoing rapid change, of the changes she has witnessed in her own small time and place.

She is interested in profusion and specificity of the natural world; she tries to make paintings that are evocative, rooted in place and acute detail but also abstractly beautiful.

Her academic background in life sciences and, later, architectural drafting, lends structure to her work. Much of her practice is focussed on capturing reflection and movement; she paints floods and ditchwater, spring runoff and domestic objects carried off in the current.

She paints nests and trees and rot and growth. I work in oil, and natural light is an integral element of my work. She makes drawings outdoors in most weather, and works from memory and sketches to develop my paintings in studio.

She divides her painting practice between Vancouver and rural Prince George, British Columbia. 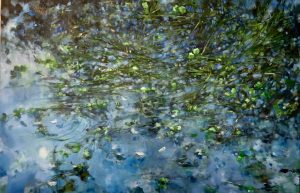 You can see more of Corey’s work and learn more about her here.