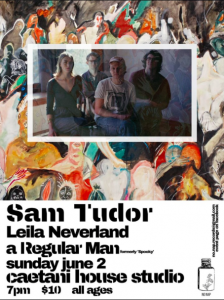 “Sam grew up at a forest research station, developing an affinity for both plants and outdated technology in the process. His album Quotidian Dream was released in September 2017 to critical acclaim in Western Canada and beyond. The Georgia Straight called it “a gem… with a penchant for everything left field” while Beatroute magazine describes it as “beautifully self aware, sonically interesting, and masterful.” Sam is a poignant, clear songwriter with experimental leanings that he proudly wears on his sleeve.”

Eerily captivating and pensive contemporary folk songwriter Sam Tudor, originally hailing from Williams Lake and heavily involved in the ArtsWells community has become a strong but unmissable force in the background of the BC music scene. Celebrating and touring the release of most recent album Quotidian Dream, most of his recent music videos are creative short-films in their own right, often moving people to tears, sharing intimate experiences heavy and elating we often find hard to bring up. Visiting with the No Nap crew for the first time with a four piece, we can’t wait for you to hear this ambient and moving set

Powerhouse vocalist and keys virtuoso (Mountain Sound) and integral part of her South Okanagan music scene, Leila Neverland brings down the house even when playing outside. Operatic, playful and seriously clever original writer and third of accomplished trio Mountain Sound, imagine something between Queen and Regina Spektor – Leila delivers.

The Artist Formerly Known as Spooky