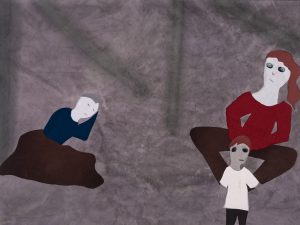 Refreshments will be served. Reception and gallery hours are open to the public and all ages. 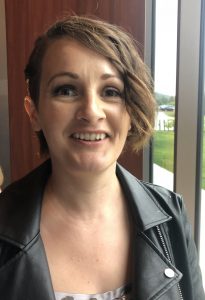 She was born in Bosnia and immigrated to Canada in 1995, at the age of 12, after living through a civil war.

Throughout her life Mirjana has always been fascinated with textiles and creating; her love for textiles was further developed during her teenage years when she opted to take sewing in high school.

Currently she is working with textiles and acrylic on a series in which she explores childhood memories and war trauma.

Her series is a series of large mixed media works in which Mirjana uses previously owned  garments, mostly from her own children to create images from her past.

Working on this series has been a self-guided therapy session for Mirjana in which she confronts her difficult past and in which she is able to release the emotions the had suppressed since childhood.

Mirjana has traveled throughout Europe and North America, visiting many exhibitions from which she draws her inspiration. She also finds inspiration in everyday life with her family.

She has exhibited her works in Kelowna and Vernon, and her work is a part of several private collections.

You can see more of Mirjana’s work and learn more about her here.

Learn more about the UBCO-sponsored AiR here and the Self-Directed Artist-in-Residence program here.