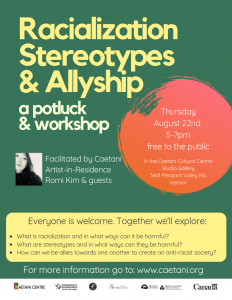 Together we’ll explore these questions:

You can learn more about Romi’s artshow here. 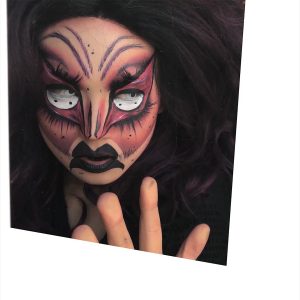 Romi Kim, 김새로미 or Skim when on stage in their drag persona, spent her pubescent years in Syilx land, specifically Armstrong, a city of 8000 people – the population of Koreans being her family.

As a second generation Korean Canadian queer person, Kim is continuingly questioning how they see themselves and how others see them depending on various factors.

Kim searches for stories of belonging to explain society and its hierarchies. She generally works in performance, video and installation to explore themes of racialization, nationality and relationships.

In Kim’s performances, they navigate the intersections of race, gender and sexualities in their drag Character Skim, who identifies as both a Drag Queen and Drag King.

They are gender fluid and use both traditional and unconventional masculine and feminine qualities through body hair, costuming and extreme make up to break down gender norms and stereotypes. In addition,

Kim experiments with different audio methods, music, as well as video framing and the bluescreen.

Media and technology are methods Kim enjoys working within as she is fascinated by the creation of our digital identities and how present they are in our modern-day society. Kim’s artistic practice is often inspired by everyday life and her own personal experiences.

Immigrant histories and colonialism are topics that she often uncovers through storytelling methods.

She creates art for more than the typical contemporary art audience and believes it is highly important that her work is relatable and accessible for everyday people who may not feel comfortable in a contemporary art space.

Kim obtained her Bachelor of Fine Arts at the University of Victoria in W̱SÁNEĆ and Lekwungen peoples territories in a double major of Visual Arts and Gender Studies.

Kim has lived in various small towns and cities in British Columbia.

She worked in rural South Korea from 2017 until 2019 and is currently based in British Columbia.

You can see more of Romi’s work and learn more about her here.