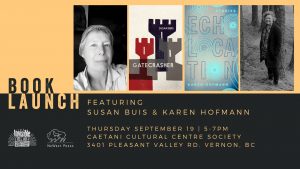 Join us for an evening of mingling and readings from: Gatecrasher by Susan Buis
Echolocation by Karen Hofmann

Refreshments will be served.

Susan Buis lives on an acreage near Kamloops and teaches at Thompson Rivers University.

Her writing has appeared in CV2, Vallum, Grain, Event, Prairie Fire, The Malahat Review, and The Fiddlehead. Her writing has been longlisted for CBC Canada Writes several times. A chapbook, Sugar for Shock, winner of the John Lent Prize, is available from Kalamalka Press.

Gatecrasher, a collection of poetry, was released Summer 2019 by Invisible Publishing.

Karen Hofmann grew up in the Okanagan Valley and is an Associate Professor at Thompson Rivers University in Kamloops, British Columbia.

A first collection of poetry, Water Strider, was published by Frontenac House in 2008 and shortlisted for the Dorothy Livesay prize. Her first novel, After Alice, was published by NeWest Press in 2014, and a second novel, What is Going to Happen Next, in 2017.

Her latest book, Echolocation, a collection of short stories, was released Spring 2019 by NeWest Press.

Books will be available for sale.