About Joanne:
Joanne Salé earned her BFA from UBC-Okanagan in 2005, where she worked in sculpture, drawing, etching, and painting. She has had solo exhibitions and been included in group exhibitions throughout the province. 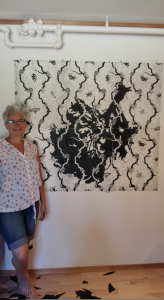 The themes that emerge in my work are primarily perception, mediation, connection, adaptation and longing.

In the past few years, my concern about the accelerating rate of species extinction has become the forefront in my mind, causing me to think about not just the interconnectedness of life, but what happens when species within this vast network become absent.

I have started to create a new body of work, collectively titled Falling, which points to the complexity and beauty of the natural world and simultaneously grieves the destruction that we are bringing upon it.
I am influenced by the work of artists such as Tim Hawkinson, Bill Viola, Rebecca Horn, William Kentridge, Sean Caulfield, and Betty Goodwin.