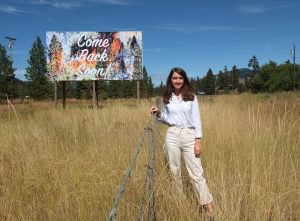 Toohey-Wiese will have an exhibition of her wildfire paintings at the Caetani Cultural Center on October 23-25. Covid protocols will be in place for the art exhibition.

Liz Toohey-Wiese has been the FreshAIR! Artist in Residence at the Cateani Cultural Center since July. She has been working on a series of paintings on the topic of wildfires, and recently put one of her paintings up on a billboard on Highway 97 just outside of Vernon.

“My interest in wildfires came after the summers of 2017 and 2018 when Vancouver had wildfire smoke drifting into the city for weeks on end,” says Toohey-Wiese. “I’ve always been a landscape painter, but wildfires started to take up a lot of space in my mind when I was making paintings of places in BC.”

Toohey-Wiese travelled to the remote community of Sointula, BC in June 2019 to undertake an artist residency at the Sointula Art Shed, where she was working on this series of paintings of wildfires.

“Last summer, my whole idea about wildfires changed. I moved to a community on Northern Vancouver Island where lots of people work in forestry. I came to that project with one idea ‘Oh, wildfires are bad, and climate change is making them more frequent and more extreme’. But last summer I spent a lot of time talking to people who work in forestry and in wildfire fighting, and I learned that wildfires are necessary and natural in the environment. It’s actually been a century of fire suppression that may have contributed to how bad the fire seasons were in 2017 and 2018.”

That series carried forward to this summer. She wanted to come to a place in BC that had been more affected by wildfires than the coast, and to be able to visit places wildfires had passed through in past years to see how the landscape was renewing itself.

While driving down highway 97 to visit the Falkland fire, a wildfire that had come through in 2003, she saw a blank billboard.

“I had painted this series of postcards last year that took tourist slogans like “Wish You Were Here!” and “Miss You Already!” and put them on top of a painting of a wildfire. I was thinking about how tourism and forestry in BC both rely on landscape, and also I thought about those slogans themselves. Who are they pointed to? And what if we pointed those statements to nature itself?”

Now, one of her paintings has been blown up to be 20 feet long, with the slogan “Come Back Soon!” emblazoned on a fire burning underneath it. 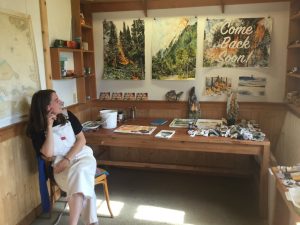 In her research, Toohey-Wiese has learned about the history of First Nations prescribed burning. “It’s something a lot of communities are talking about now, and BC Wildfire is doing some really amazing collaborations with First Nations communities. There were thousands of years of First Nations communities burning the landscape when it was safe to do so in the winter months, both to bring berry bushes back, and create range land for hunting deer. There was an understanding of the importance of having a relationship with fire, and it’s fascinating to see how that knowledge is coming back.”

Being in this region has offered her a proximity to fire she hasn’t experienced before. “I went to Penticton the other week to see the Mount Christie fire, and that was actually the first time I saw a wildfire up close. I was so in awe both of the power of the fire, and of the precision of the helicopters and planes that were keeping the fire away from the houses. My paintings have always been based on photos from news reports and historical images, so it was very powerful to watch a wildfire in person.”

When asked about what keeps her interest in wildfires, she said: “Wildfires are such a complicated topic, and I think that keeps me coming back to them again and again. They are of course devastating, and I think of the people whose houses burn down and what a terrible loss that must be. They are also necessary to keep our landscapes healthy, and many wildfires are caused naturally by lightning. I also think about how they are a metaphor for other losses in our lives, but wildfires create environments for flora and fauna to return quickly, so there’s the aspect of renewal and rejuvenation inherent in them as well.”

Along with being an artist, Liz Toohey-Wiese is a professor at Kwantlen Polytechnic University in Surrey, BC where she teaches drawing and painting. A Faculty of Arts Excellence and Advancement Fund grant from Kwantlen Polytechnic University paid for this billboard. “My budget was of course smaller than a lot of businesses would have for advertising, so I was so happy that my university saw this to be a worthwhile project to support. My hope is having this piece of public art on display for the next few months will create an interesting dialogue with the communities in this area.” The billboard will be on display until March 2021.

Toohey-Wiese will have an exhibition of her wildfire paintings at the Caetani Cultural Center on October 23-25. Covid protocols will be in place for the art exhibition.