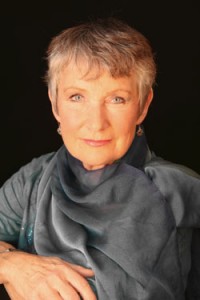 Christine was trained in acting and teaching at the East 15 Acting School in London, England. She operated her own drama studio and taught at several reputable drama schools in England. Subjects ranged from Shakespeare to Victorian Music Hall. She has worked extensively in theatre, TV and film. Canadians will recognize her from the Benny Hill Show on TV and The Fool on film video. She has toured much of Europe, the US and Australia as a stand up comic.

When she immigrated to Canada in 1992 to be with her then recently widowed mother, she focused on interpreting history in an interactive, enjoyable manner and has worked at historic sites from Barkerville to Fort Langley. Locally, she plays Mrs Mackie at the Mackie Lake House in Vernon and gives garden tours and discourses about Sveva Caetani and her family every summer, dressed as the family companion, Miss Juul.

Not only does Christine perform her own one-woman history-based shows in schools, museums and theatres, but she is also popular throughout BC for her Knights of British Knonsense when she can let her hair down and indulge in that specific brand of British humour that leaves some Canadians cringing and others hooting with mirth. Other shows include What Women Wore and Why and We’ll mMeet Again. Please check her website: www.christinepilgrim.com for more details.

She writes most cover stories for North of 50, a news magazine that circulates throughout the Okanagan and much of the Cariboo and Similkameen. Currently, she is working towards publishing her children’s story, about a Bear called Ffffff…with illustrations by Destanne Norris who worked from one of the Caetani garden studios in 2007

Christine Pilgrim also specializes in storytelling and helps youth at risk manage conflict in the workplace through drama and improvisation.

Christine moved to Vancouver in 2015.