Destanne was the Caetani Cultural Centre AiR in 2015, and most recently she completed an art residency at the Banff Springs Hotel. Back in the studio she is now preparing for an exhibition on Dark Skies opening July 27, 2017 at the Vernon Public Art Gallery. In addition, a trailer to the documentary being made about her art life has been released by En Queue Film.
To find out more about the En Queue Film, click here.
To watch the trailer on YouTube, click here!

www.destannenorris.com
Destanne Norris is a professional artist who received her BFA (Honours) degree in painting and drawing from the University of Victoria in 1987. After graduating from the University of Victoria, Destanne moved to Jasper, Alberta where she could be surrounded by wilderness. She participated in many workshops, Artist in Residence programs and Visiting Artist programs; and became a juried member of the Alberta Society of Artists and Arts Jasper.

Her great love of nature and the outdoors has been the inspiration for her work and Jasper National Park provided her with a spectacular array of subject matter. Her paintings are impressionistic with a bold use of colour; they are accomplished and assured, exuding a great sense of connection to the landscape.

Destanne left the Rocky Mountains to pursue post-graduate studies in Art and Environment at the University of Tasmania in Australia – Natural Environment and Wilderness Studies is well integrated into the Art Department. In 2009 she was awarded the Master of Fine Art degree from the University of Tasmania, yet it was the call of ‘home’ that brought her back to live in the Okanagan in Canada.

Her unending passion for natural environments and the elements, especially mountains and water, continue to be the source of Destanne’s artistic inspiration. Landscape and place, metaphor and symbol, embodiment and Romanticism are her research interests. While an overarching theme in her landscape painting is the mirroring of ‘inscape’ and ‘landscape’.

Destanne’s paintings have been exhibited internationally and nationally in Public, University and Artist-Run Galleries. Her work can be found in numerous private collections around the world and in corporate collections, as well as being in the permanent collection of the Alberta Foundation for the Arts and the Penticton Art Gallery. Destanne is represented by Gallery Odin www.galleryodin.com at Silver Star Mountain, BC and by Mountain Galleries www.mountaingalleries.com with locations in Whistler, BC and in Jasper and Banff, AB. 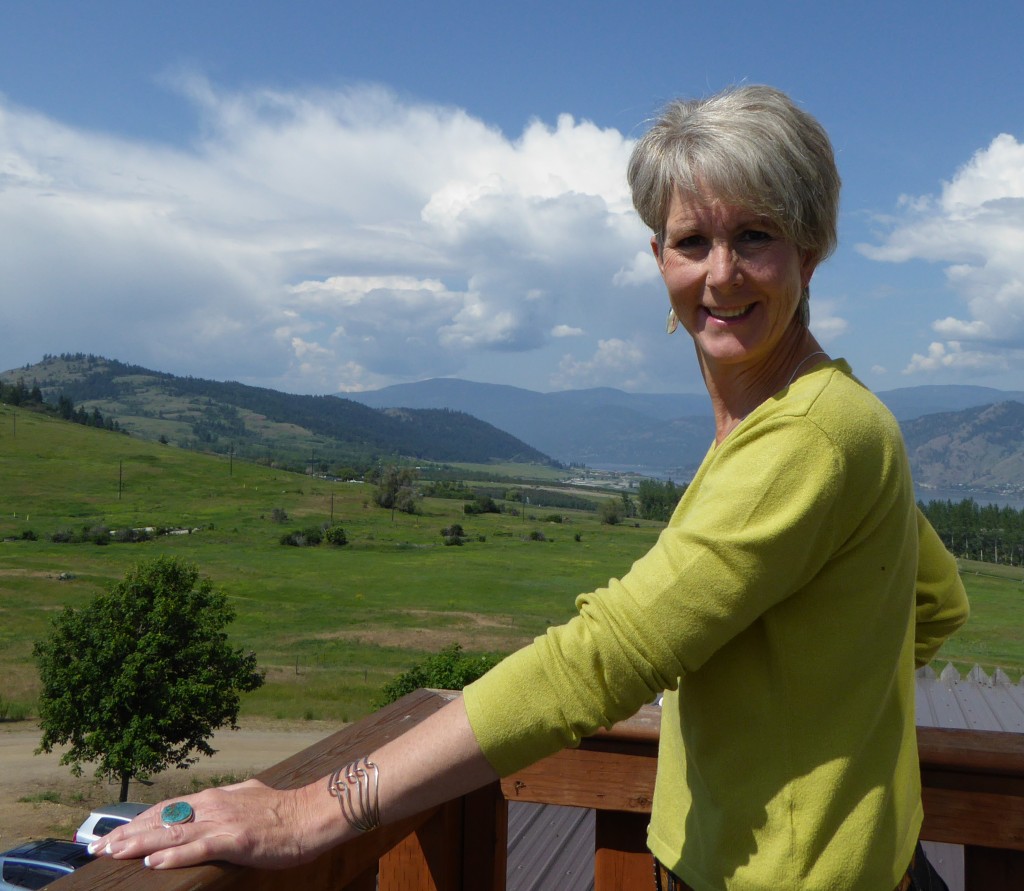 “Whether from the Centre” –  Destanne Norris’ work is a convergence of landscape and place, metaphor and symbol, embodiment and Romanticism and the mirroring of ‘inscape and landscape’. Fascinated by weather formations and light in the sky, this project, which will take the form of a multi-paneled 6’ X 8’ painting, will explore “weathering” and “whethering” directly as metaphor for inner and outer life.

Watch Destanne Norris sketch and then paint a work that will become “Flight Path.” 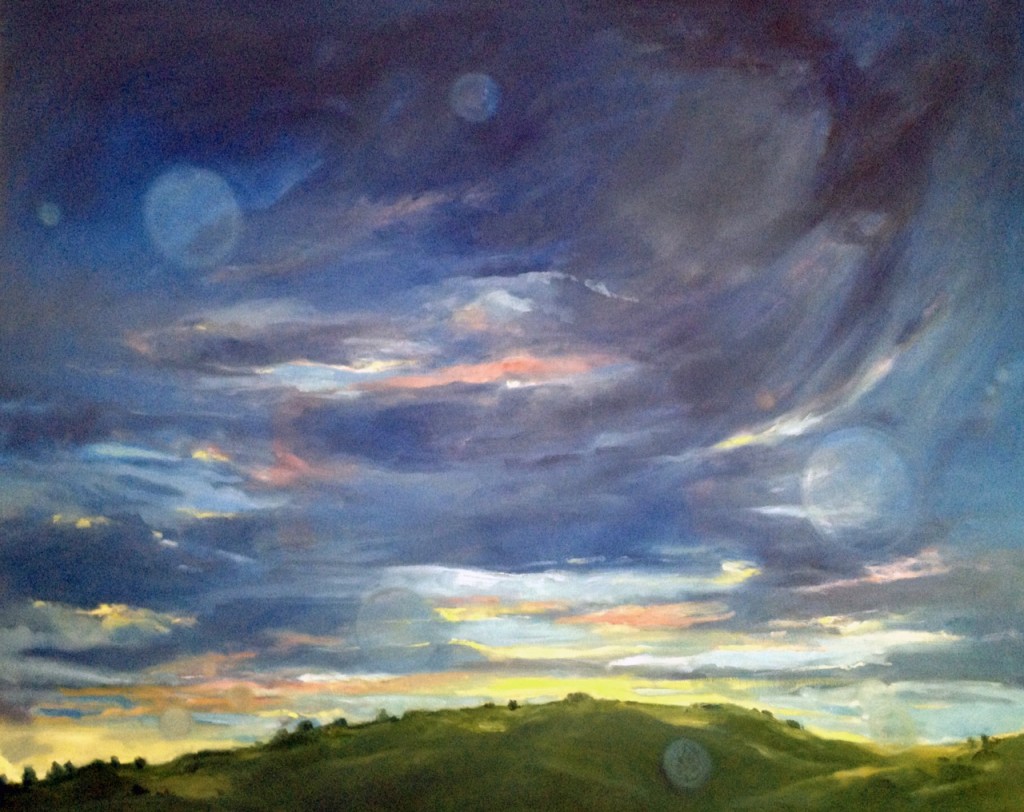 Destanne was admitted to the Master of Fine Art degree during convocation in August 2009 at the University of Tasmania in Hobart, Australia. Destanne’s passion for nature and wilderness inspired her on adventures to hike in and paint the Rocky Mountains in Canada and to kayak the rolling waves on the Tasman Sea. Life experiences taught her to ride the waves gratefully.

Destanne received a BFA (Honours) Degree in Painting and Drawing from the University of Victoria in 1987. Ten years later, after the passing of her youngest daughter, Destanne resigned as Manager of Tekarra Lodge, a seasonal cabin resort in Jasper National Park, and began to pursue her passion for painting full-time. Primarily an oil painter of landscapes, her practice and work was based upon her direct experiences in nature while on adventures into wilderness and natural environment areas. She was inspired by and very fortunate to have painted alongside Doris McCarthy, one of Canada’s highly regarded landscape painters, and also contemporary landscape painter, David Alexander during a helicopter painting trip.

As Destanne’s career progressed she partook in workshops and artist-in-residence programs; she became a juried member of the Alberta Society of Artists; she was represented by three galleries in British Columbia, Alberta and Saskatchewan; she participated in numerous group and solo exhibitions in both public and commercial galleries, in addition to various special projects; and her paintings were purchased by many international private collectors and may be found in corporate collections, including the Alberta Foundation for the Arts, the Consulate General, Japan, and Fining Canada.

Upon returning to Canada in 2006, Destanne moved to Vernon, British Columbia, to live, paint and complete her MFA studies. Destanne’s MFA research project entitled, painted pools: a lens into subjectivity, explored the concept of water as a metaphor for life. Selected works from the water series project were exhibited at the fina Gallery at the University of British Columbia Okanagan in 2008. In addition, a video loop of her entire MFA water paintings choreographed to wave and storm sounds were shown.

Since this time Destanne has been curated into three other exhibitions at Public Galleries, as well as participating in Members’ exhibitions and selling her work through commercial galleries: Mountain Galleries and Gallery Odin. Currently, Destanne lives on Silver Star Mountain and paints in her studio at the Caetani Cultural Centre in Vernon.

Landscape and place, metaphor and symbol, embodiment and Romanticism continue to be her research interests. An overarching theme in her landscape painting is the mirroring of ‘inscape and landscape’. Over the past number of years, Destanne has been looking up and out across the great expanse from her mountain top home. Fascinated by formations and light in the sky, as well as the weather, her paintings have explored this subject as a metaphor for inner life.