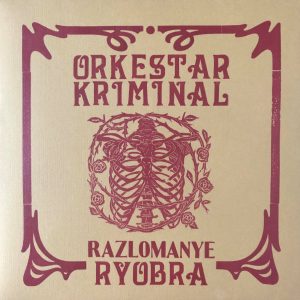 It was a sad time.  It was late August.  The pandemic was in full swing.

Caetani artist in residence Lisa Gamble’s  band, Orkestar Kriminal, based out of Montreal released their brand new album Razlomanye Ryobra without her.  It was a fabulous affair streamed live in collaboration with POP MONTREAL but due to Covid-19 Lisa never made it back and completely missed the event.  They were the only member of the 11 piece band that was not there.

Lisa’s now in Vernon at an art residency sheltering in place enjoying the beautiful Okanagan.  The hand-printed vinyl record has officially been released throughout Canada on Coax records (rae spoon’s label)  and is available for sale around the world and online…

As an act of rebellion and response to the isolation and cultural wasteland their life has become though out these hard times. Gamble (the saw player) will be hosting an online release “of their own” at DOGWOOD RECORDS// THE CAETANI ART CENTER in Vernon, BC.   The physical records will be here for purchase.

Musician, Lisa Gamble will insert themselves LIVE!! into the footage of the original streamed release concert and play all the band’s hit songs—via green-screen magic- while interacting with the audience, answering questions about their day, the record, the process of recording and being separated from their band.

Orkestar band member Lisa Gamble (musical saw, baglama, percussion) will play live with a video of her band via green-screen and computer magic to celebrate the launch of their band’s new record.

“Imagine a 10-member gender-balanced band that sources material from the criminal underworld a century ago, performing songs in eight languages with quirky instrumentation and a punk attitude”

“Ryobra is an intoxicating listen… I found myself captivated from beginning to end.”

“This is one of the most unexpected and musically adventurous records to come out of Canada this year.“

Orkestar Kriminal is a Montreal based musicology project/ band comprised of 5 male and 5 female musicians who have rearranged, remodelled and reinterpreted inspired renditions of slum-based pre-1930’s “international music”. They sing gutsy and adventurous criminal songs from a dangerous and forgotten era, including Mexican tequila-smuggling tunes, Russian prisoner laments, and the grooves of a Yiddish gangster.

Last year, Orkestar Kriminal remixed and remastered their latest album Ryobra for a special vinyl release, entitled Razlomanye Ryobra (“Broken Ribs” in Russian). The album is now available and can be found in various shops through-out Canada.  It sports a gorgeous hand-printed letterpress jacket and design by Kiva Stimac of Popolo Press in Montreal. This vinyl release was scheduled for release on Coax Records in March 2020. Unfortunately, due to the pandemic, the vinyl release and tour had to be rescheduled. In response, they’ve organized a series of special live stream concerts to celebrate and promote the vinyl release.

The first of these concerts happened in Montreal as a co-production with Pop Montreal.  It was a beautiful full musical show with improvisational moments, description’s of each song in both English and French, to help our listeners grasp the lyrical meaning behind our arrangements sung in Yiddish, Greek, Russian, Spanish and Pashto.  The streamed concert was produced in the “streaming studio” of the Le Ministère, a Montréal venue that has now shifted focus in the pandemic.

“We will now celebrate its availability”

Ryobra is the Russian word for “ribs”, referring to the clandestine method in which prohibited music was once distributed in the Soviet period, where phonographic recordings were cut into old x-ray films. Throughout the album, listeners will discover 10 old underworld ballads that tell stories of impoverished people from the interwar period, driven to a life of crime.

Orkestar Kriminal was last seen out west at a few popular festivals like Folk on the Rock and Dawson City music festival. They also toured last summer through and around Edmonton, the Vancouver area, Nanaimo, and Victoria.

We acknowledge the support of the Canada Council for the Arts. The creation of this work was made possible thanks to the financial support of the Conseil des arts et des lettres du Québec. This project is funded in part by FACTOR, the Government of Canada and Canada’s private radio broadcasters.